Circa 1988 I pulled out of the station parking lot, starting my pm shift in the city of Lynwood. The radio barked, Deputy T was on the patch, he was following a 10-29V (stolen car) north on Atlantic avenue crossing Imperial Hwy. Before I could get my lights and siren on the radio barked again. 998 (deputy-involved shooting) Deputy T yelled into the radio. The stolen car had slowed to a crawl along the south sidewalk. The right passenger jumped from the car and ran back toward the Sheriff’s car shooting. He fired numerous rounds into the front windshield of the police car, attempting to execute Deputy T. Deputy T quickly leaned over, taking cover behind the dashboard, avoiding being struck by the incoming rounds. You can see in the photo that a round skipped across the hood. You could die working Lynwood, but not of boredom. 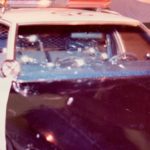 I can’t thank everyone enough for their supportive comments regarding the cease and desist order for my book cover. Putting the two badges on my cover was an artistic choice to represent my service as a deputy from N.Y. to L.A. This is a memoir of my police career, thirty years with the L.A. Sheriff’s department. The ridiculousness of the department not wanting me to use an actual image of the badge I wore is obvious. I could have just as easily used a picture of the state of N.Y. and the state of Ca. It doesn’t change my story. Others have blurred or otherwise altered the image to get around the trademark issue. I chose not to use the department’s image. Thanks to the many who have read the book and left such fantastic reviews on Amazon. 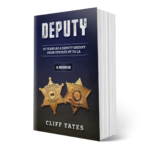 We saw “Rambo Last Blood” today. We liked it. Plenty of action, of course, but also a story that stimulated some emotions. I always really liked Sylvester Stallone. I enjoy seeing an actor in his seventies still in fantastic shape and doing what he loves. If you liked any of the Rambo movies, you will probably like this one too. 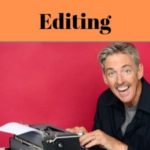 I love being in my creative brain when writing. But now it’s time for revising and editing, getting into that creative brain and looking for mistakes. First a read through, and then I run it through a program. My next step is to print it out and read it aloud. Next I will be sending it out for a different set of eyes to edit for grammar. Exciting to see the light at the end of the tunnel. Almost publishing time.

It’s been a wonderful two months on our private Island in the 1000 island NY. It started off tough with our brand new septic tank being washed away because of flooding. We also lost whatever leach field we had. We went to a new system which is a state of the art residential waste treatment plant. It involved installing a new fusion tank and pumping the affluent (grey water) to another part of the island. We had to create a leach field ten feet wide and thirty feet long. Finally we have our new system in place. This picture was taken from our back deck on our last night. A few of our island friends came over to have some last night toasts. Concentrating on writing and needing spiritual motivation, our island does the trick. We are blessed that my grandmother left the island to my parents, who wanted to leave it to my wife and I.  We are now back in California, and time to get back to our creative lives. 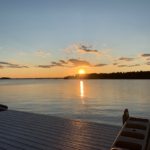